Hatsumode is the first visit to the shrine during New Year, where people pray for the whole good coming year. The shrines are super crowded during this period so actually Hiro planned to go there in the second of third week of January, when hopefully the crowd is lesser. 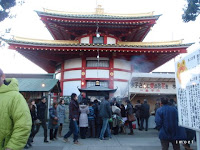 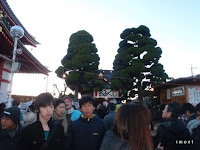 But Iki, who now learned a lot of Japanese traditional custom from his daily life, school or even television, asked Hiro to go to Shrine during last New Year holiday. Because he wants a daruma-san for his New Year good luck charm. 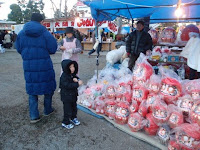 We went to a shrine in Sanno, about 1.5 hour drive from Tokyo. Iki could buy his Daruma-san there and then Hiro planned to go to big Outlet stores nearby. There were lots of small shops along the street to the shrine, so it was a good opportunity too to try some festival (and street) food of Japan. 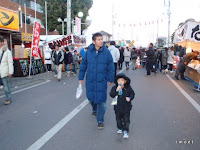 And yes, it was very crowded. We had to queue in line for about 1 hour only to enter the shrine. And needed more than 5 hours to try to queue to the outlet store (then we gave up after 1.5 hour lining!) and to drive back home because of the traffic jam.
Posted by imoet at 1:00 PM