After 9 years.....last night I met Vik, a senior in my high school, to whom I had a deep crush for four years.

Still cute as I could remember, his smile brought me back to my high school time. Yesterday was my first time going out only with him since the first time I fell to him. Felt like dreaming hahahaha.

There're lots of things undiscovered and unexplained between us, and last night we started to talk about it. After 9 years......

Nostalgia was what we did, we both laughed out loud as we re-call our memory. I blushed almost all the time knowing how terrible I was. So ashamed!!!! I just found out last night that he actually felt irritated and disturbed with my aggresiveness ecpressing my feeling during high school.

1. For 6 years I always sent him my personalized christmas card - vik hated it
2. I made up reasons several times to borrow his physics text book and wrote something in it when I returned it - vik hated it
3. I always called him every Sunday after watching Doraemon on TV - vik always tried to avoid me
4. I joined basketball training, because he also joined the training - vik awared, wanted to stop, but he also loves basket ball. So he was suffering.
5. The parking lot was nearby my classroom, so I always waited for him passing by - vik always wanted to run away
6. Sometimes I left love letter at his motorbike - vik threw it away after reading it (well, at least he read it!!)
7. I always went to toilet nearby Vik's classroom during session break - vik had to go to toilet after the bell rang to avoid me.
8. I told vik I liked to go to buy es kacang hijau at a small canteen near his classroom to attract his attention - vik said he never noticed me
9. I told vik that I liked to send a message for him at the famous radio station in our town. Almost all the people in my high school knew about it but...- vik: "what?!?! really?! nobody told me!!! but....thanks God I didn't like to listen to radion!!!"
10. Me: but you do realise that I was so in love with you at that time?"
Vik: YES!!! But I wasn't in love with you and suffering being in school because of you"

HAHAHAHAHAHHAHA lucky him I already have someone I'm in love with at the moment!!

I didn't cry nor hated myself to know the fact. I enjoyed my high school time and the feeling was so precious, though later on I discovered vik was so miserable because of me hehehehe.

Vik said that it's a good thing, that nothing happened between us, otherwise now we couldn't be friends. He's true in this case ;-) 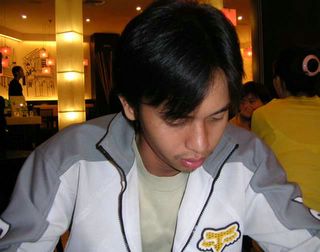 So after 9 years......after last night talk, all things have been explained, and the special feeling towards him, had just gone in a second; replaced with an everlasting feeling: FRIENDSHIP.

Oh Man........
Why are you coming back again into my life?
Please please please stay away. You are the last person I want to have contact with, if you are still acting like this.
I may sound harsh....I DO, coz it's over my limit already. I can't stand you (_ _o).
Thank you so much, but please take back all your attentions which for me sounded like attracting my attention. I don't need it from you....I don't want it, not even any gifts from YOU. And STOP reminding me that you are sending it. AHA....I probably will send it back, you know....(@_@).

I do appreciate our memory. But I already put it at the bottom of my heart, and lock it in a small box there. Trying to remind me all the time won't do any help to our relationship.

So, I guess this is it. Hope you can understand.
Posted by imoet at 2:26 AM No comments:

So.....I'm 25 years old today.
Quite different from the previous years, this is my first "rupiahless" birthday (_ _!). Sorry guys, couldn't afford to treat you hehehehe. That's why now I am sitting in front of my computer at the office - spending the first day of my 25th years of living.

Anyway I'm happy today. Rupiahless doesn't mean that I didn't enjoy my day. I have best friends here, and it's always a nice thing to have their attentions.

Thanks for the phone calls, sms, emails, e-cards, gifts, cakes - most of all, thanks for the warm smiles and the fun that cheered me up this whole day. 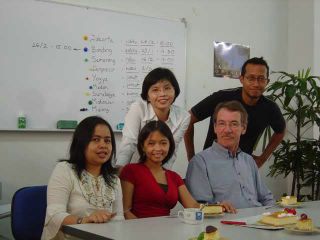 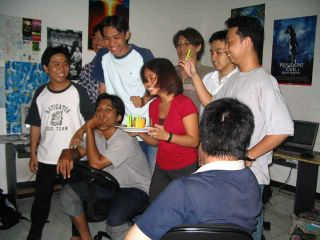 [2 weeks ago]
A friend: hey young lady, what a dirty bike!!!
Me: hmm yeah....no time to clean it. Anyway, it's rainy season. It will be dirty again once the rain comes.
A friend: why do you take a bath everyday?
Me: hey, if not - dirty!
A friend: if you know it will be dirty again, why wasting ur time cleaning it everyday?
Me: HAHAHAHA....shut up!! This weekend I''ll try to spend sometime to clean my bike.

[3 days ago - early morning when I came to the office]
Me: ha...? who took out my bike from the office room?
Colleague: Office boy did it early morning
Me: oh...nice of him hehehe

[This morning I saw a bike park in front of the office building. Looks like mine.....but not sure]
Me: Who came so early to this building? there's a bike parked already. hahaha looks like mine
A friend: No laaah.....yours is so dirty. this one is clean
Me: WHAT?!?! did the office boy wash my bike?!?!?!?!!?

So ashamed!!! Seems like the office boy couldn't bear my dirty bike anymore........

Am I that terrible in this cleanliness matter?!
Posted by imoet at 4:54 PM No comments:

When I was in elementary school, my parents started their own business that they were too busy to take care of me. Sending me to Manado and let my grandparents raised me was what they did. So there I were, being taken care by oma and opa during my childhood.

Life value and custom; traditional habits, children songs, were taught to me by oma, instead of my parents. Still fresh in my mind, her soft voice singing to get me into sleeping; her small body rushed to welcome me everytime I arrived from school shouting; her small hands changing my cloth and tidying my long hair every morning before school. Her massage on my feet everytime I complaint of walking too much, her smile when we were talking about my dream being a doctor (which is not happened now!).
Oma who always wanted me singing while dancing in front of everybody, and even she asked me to do that last time I met her! (but I didn't do it since i thought that I 'm not a little girl anymore!!).
Oma always encouraged me to be number one. She was the one who said that I am small so I have to prove the world that actually am not small. Her words helped me building my self-confidence, and be what I am now.

81 years old of your life...I believe you did lots of big things. Not only to me, but to your husband, 7 children, 17 grandchildren, and 4 great grandchildren. We are all weeping of your leaving yet we believe you are already in peace now.

"There's something in the way you look at me..."

It's part of song lyrics of Christian Baistuta that now keep running around my head. It's the fact, that I always fall to beautiful eyes. And "eyes" is the first thing amazed and force me into "love"!

From eyes you can see the real feeling, the real emotion, the real expression, THE REAL whatever...There the truth lies, and love can be felt best.

I love your eyes, with the beautiful long lashes (that I envy most). It always be a certain satisfaction to look into it; and for sure, "there's something in the way you look at me"....that drives me crazy of YOU.

Loneliness is all I have now. Emptiness is what I see. 'Till when should I get trapped in this situation? I envy those who can see who then want to see, who can touch who they want to, who can laugh with whom they want to be, who can talk and share their feelings; and most of all who can be with the one they love best.

I feel like running, but seems you are so far away, couldn't be reached. Doh!! Can't even feel whether you turn your head behind to see me?

Call me sensitive, call me possesive. Am I wrong to have this feeling? Painful- if you want to know how it is! 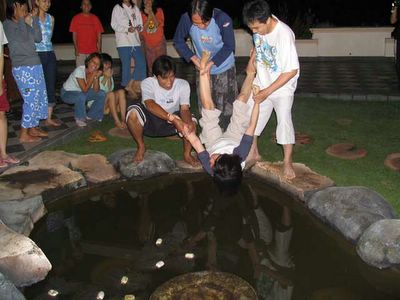 I have a colleague named Lisa, but she is more familiar with "GABUS". Looks ordinary, with her small body, glasses, and sometimes "blank" look. BUT definitely extraordinary once she opens her mouth, and say something!!

Words from her mouth always can lead everybody into laughter, and her naughty attitude invites people to kick her ass. She is just a perfect refreshment for anyone bored of editing works, especially when she starts to change the songs' lyrics as she likes. These are enough for everybody to do something nasty for her birthday surprise.

Last Friday my office had annual meeting at a nice villa with beautiful scenery at Trawas, about 1.5 hour from Surabaya. Saturday'd be Gabus' bday so we planned to give her suprise at midnight. At 00.00 Nyo woke everybody up to surprise "sleeping gabus". But apparently she heard the noise, woke up and went downstair. We just used to chance to grab her when she walked downstair with her sleepy eyes. The boys held her legs and hands tight and brought her outside, onto the small pond. Gabus screamed, and everybody laughed.

The comedy continued when Mariza tried to force gabus to finish her huge hard birthday bread. Because her stomach couldn't afford the big bread, the boys grabbed her again and put her into the ponds hahaaha, plus cold water on her head from Mariza. Poor gabus, but HAPPY BIRTHDAY!! I forgot when was the last time I laughed that much.