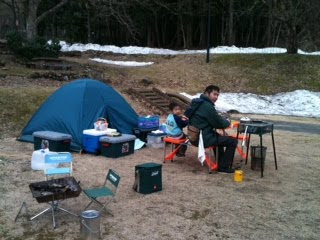 We will spend four nights, half part of our golden week holiday
sleeping in this tent in Tateyama area. It took us 9 hours driving
from Tokyo yesterday because of heavy traffic jam!

Too bad it's raining today...we have to give up our plan for Tateyama
alpine route (~_~;). But well, we are off to Kanazawa city in ishikawa
now! (^O^)／

Iki just started his school again after spring holiday. He is tsukigumi (highest grade in his kindergarten) now and this year will be my last year making bento for him!!
This is last Wednesday's Bento, for his Ohanami (cherry blossoms) picnic (^_^) 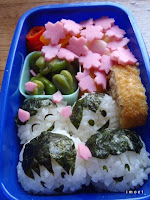 We actually didn't plan any overseas trip because we wanted to drive around Japan this year, but my brother got married last March so we ended up spending the spring holiday in Indonesia. Iki unexpectedly agreed to help bringing the bride's gown! He did a very good job! I knew my very shy boy was so nervous that he almost cried after he did it :p. It was a huuuuuge thing for him walking in front of hundreds of people haha 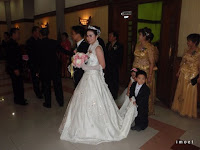 Hiro lost his Iphone in Surabaya so we kind of lost of holiday mood. He put a lot of important data there and it was really scary to imagine if someone could manage to open his password vault inside the iphone!! But Iki had to enjoy it so Hiro spent time with him in the swimming pool :). It was surprising to see Iki's swimming progress now 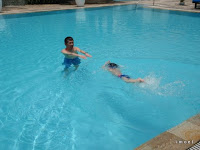 We had dinner at Iki restaurant on Hiro's last night in Surabaya. Well, we really had to go there this time. Surprisingly one waitress still remembered Hiro and me! Iki can read now and he was very excited to read the restaurant name LOL 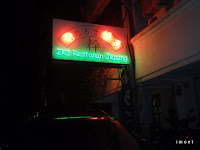 Too bad I didn't have good appetite during my trip in Surabaya. I couldn't eat a lot but I was happy to be able to eat my fave soto banjar and baksowith Enyo. Also this bebek Sinjay for breakfast one day!! Boy it was soooo goood!!! and it was the biggest meal I had during my whole trip in Indonesia! -Thanks, Vi! 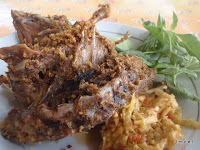 Then we went to Manado. I realized that I really don't have any single friend in Manado that I spent my whole time with my family. We (me and Iki) really had quality time with families, which I'm not sure could happen again anytime soon.....Iki had so much fun!! 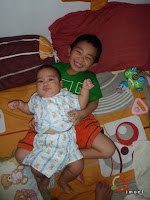 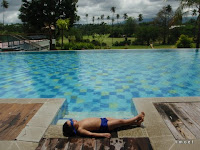 I just can't believe that I lost 1.5 kgs during my holiday in Indonesia!!! usually i gained at least 4 kgs during holiday. Blame it to the "good quality" family time....?? hahaha
Posted by imoet at 3:19 PM 3 comments:

We are back in Tokyo. Well, 5 days ago actually. Then I had 5 full days of house chores. Arghh it's always hard to get used to this do-it-myself-life again after going back from Indonesia.
Iki's school will start next week so yesterday I remake his old smock. This would be his last year in Yochien that I don't want to make a new one. 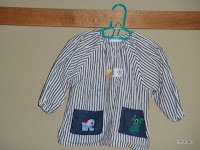 This time of the year is when I remember that I have a sewing machine somewhere in this house ;-). The final result is not bad, right? Iki chose the pokemon printed fabric himself :p 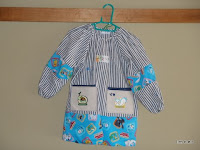