Getting ready for winter

I live in a city where most women take a really good care of their body appearance (read: slim or VERY slim). The concept of winter and putting on a lot of clothes for warmth scared them off because they don't like to look fat (or a little bit fatter).
I think that is why these amazing products are invented: HeatTech clothing and Kairo (pocket warmer).
HeatTeach clothing from Uniqlo Japan is my biggest recommendation to stay fashionable while fighting with cold weather. They are very thin inners that are made by special fabric that can keep your body warm. Now it varies from turtleneck inners, T-shirt, camisoles, leggings and tights, socks and even now (unfortunately) SKINNY trousers (which I really want but don't fit my fat legs!).

Winter is not really my favorite season. Hey, I'm a tropical woman! That's why I really fell in love with this products the first time I found it. For me, 1 turtleneck inner = 1 fleece jacket. Two turtleneck inner = 1 wool sweater.
I looked like a pregnant snowball during my first winter in South Korea, but now that I had found HeatTech products, I don't need to put on thick layers of clothes anymore!! 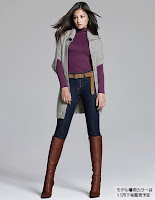 And my other favorite for winter is Hakkin Kairo, or disposable pocket warmer. It was invented by Niichi Matoba in 1923. Kairo is using platinum catalyst technology, that is environment friendly but really useful to keep your body warm during winter. 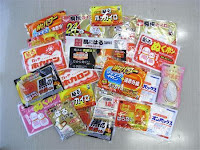 At this time of the year Kairo can be found like almost in every drugstores or supermarkets all over Japan. The pocket warmers are thin, easy to slipped into pockets. Some are specially designed to slip into gloves or socks. Some can be sticked into inner clothes for extra warmth.
If any of you wonder how I could still look slim during winter. It's because of those two products. I put on heattech inner clothing and have kairo in almost every pocket (^___-)
And what are your favorites for fighting the cold weather...?
Posted by imoet at 10:16 PM 5 comments:

I also joined Iki's schooltrip for harvesting sweet potatoes last two weeks. Not only kids enjoying this kind of activity, but me too!! As long as I could remember, I have never paid quite amount of money to harvest veggies or fruit MYSELF back in Indonesia! I did pay the gardener to do the whole thing ;-)
At first he used gloves because he didn't want to touch the soil. 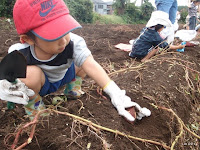 But then what the heck! haha 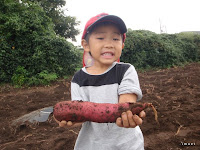 Dig dig dig! Everyone tried to get as much sweet potatoes as possible 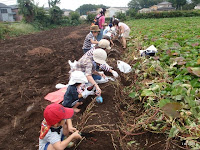 Then we had picnic lunch together 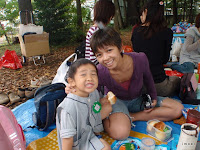 This was Iki's obento. Halloween theme one again.
Everyone was dead tired. But had to walk about 20 minutes to the train station. Bringing the sweet potatoes back!!!! Thanks God I brought this (^_-) 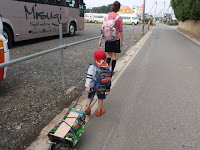 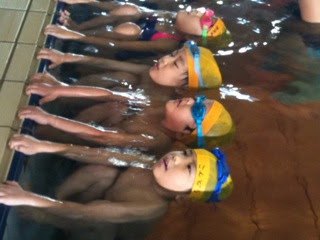 Today mothers were allowed to go to poolside and took pictures!

Iki likes swimming now and I was thinking to add one more swimming day
for him. But winter is just around the corner, going to the swimming
school is another freezing trip for me (@_@)

This was last week's bento for the upcoming Halloween 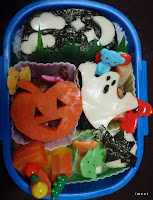 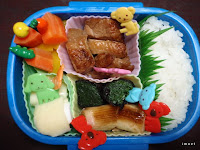 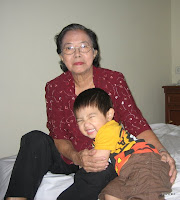 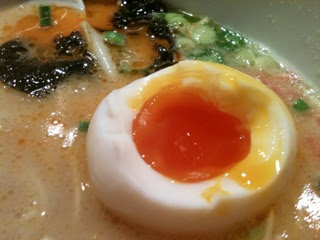 It is definitely my favorite ramen ever!!

Tonkotsu ramen is Kyushu (japan southern island)'s specialty. The
thick broth is from boiled pork bones, and varies in some areas all
over Kyushu.

There is garlic tonkotsu based broth, miso tonkotsu, and spicy
tonkotsu for example.

Personally I like the simply white tonkotsu broth, with not too soft
ramen (Chinese wheat noodle), some slices of char siu and aji no
tamago (tasty half boiled egg). 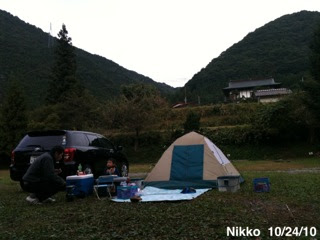 Iki had high fever after swine flu injection last Thursday. We almost
thought that we couldn't go to our might-be-last camping this year.
But he looked fine on Saturday morning! So off we went to kinugawa
hotspring area in nikko late in the afternoon.

It was a good decision though. We were more experienced this time, so
things ran really well. And we enjoyed our might be last camping this
year �

I seriously don't want to remember your age haha!
A very happy birthday, honey. Sorry for the burnt cake, it was supposed to be a campground anyway ;-) 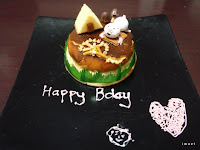 Tooooo bad Iki got fever that we couldn't have your birthday camping this weekend. But we did celebrate it with a little tent and campfire yesterday (^___^) 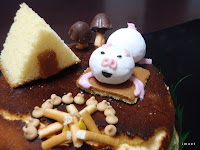 I think almost all kindergartens all over Japan scheduled Undokai or sport day last Saturday - and then rescheduled it to Sunday or Monday because of the pouring rain! It was kind of ruining our mood and plan to go camping for that rare long weekend, but apparently the super shiny Monday when Iki's undokai was rescheduled was just a perfect time.
Iki's school is a small one, run by Hiro's company's management. It's much much cheaper than normal kindergarten around, but mothers have to participate in all event it held. Which is actually tiring eventhough they're all good fun. Also for this undokai. Mothers had to prepare a lot of things, decorated the school, cleaned it well, and had performances too. As I'm writing this the next day, I can feel my whole body aching from the participating there.
On the other hand, the undokai itself was great. The fact that not only kids participated was actually fun too. They had games for moms, dads, toddlers, and even yochien's graduates (two of them were grown ups and work for the company too!) 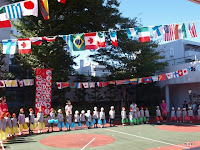 They had sprint. Of course my boy lost haha! 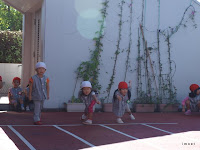 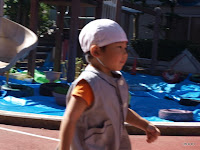 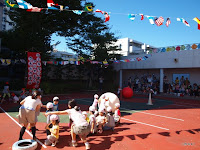 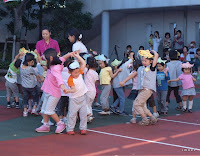 Walking on a "bridge". This is interesting because each kid has to show their own creativity. Iki surprisingly "walked" on his butt haha

Throwing balls into the nets 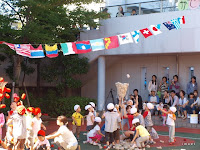 There is fathers' dancing wearing vegetables hats too. Papa-chan was the only one wearing REAL chinese cabbage hat hahaha. How funny!

Mommies also had to dance samba together, and made performance to support each group competing. I was participating so I don't have the photos :(. It was good memory though.
Poor daddies then had to race bringing the kids on the back 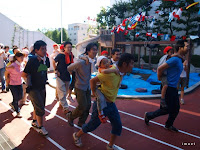 The undokai was closed by Mommies and Kids dancing.

And of course everyone has to clean up the whole school after that, except papa-chan! haha

I had a very bad morning that really ruined my day, that I was surprised I could finish making this bento. I am not satisfied with the result, and so was Iki..... :(
But he had to bring it to school anyway.....
The inside part was like this: 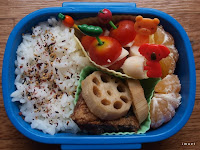 I put furikake rice inside, with Tetsuage Fish and Renkon, mini tomatoes and sliced cheese on the picks, cheese kamaboko sausages, and mini oranges as dessert.
And then covered it with the pinky Lightning McQueen - ah....it was supposed to be red! 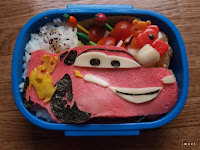 It's made from white eggs omelet (with supposed to be red food coloring added), sliced cheese, and nori for decoration.
Posted by imoet at 2:00 PM 3 comments:

After very very long summer holiday, the Wednesday bento was started again last week. I almost forgot how to make bento again! LOL
Let's say it was a warming up one for that Wednesday: Tomica cars Bento 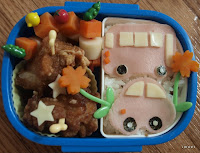 Inside:
Fried chicken
Carrots cubes and processed cheese on the picks
Furikake rice
Sliced ham, cheese and nori for the tomica cars
Posted by imoet at 1:53 PM No comments: 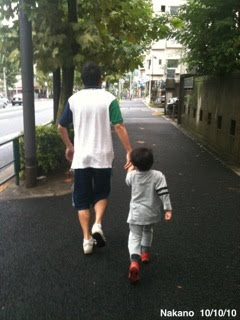 It's been kind of routine lately whenever we don't go camping or if
iki doesn't stay over at his grandparents' house. We run about 1.2 km,
have breakfast at mister donuts or mcd, then walk back home.

The fatty breakfast has probably double or triple calories we burnt
during running, but hell, it's a fun family time � 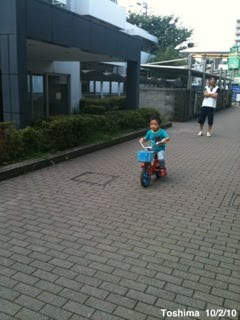 In a day he could ride a two wheels bike already!!! How time
flies....he is not my little baby anymore
Posted by imoet at 12:21 AM 1 comment:

I had never thought that I would be an English Teacher in Tokyo. I did want to work because I was practically doing nothing than spending a lot of money eating and shopping with friends while Iki's at school. Applied for some administrative works, but well....I have not enough Japanese for that kind of job ;-)
Some mothers requested me to teach English to their kids then. At first I was just doing favor for the kids from Iki's class. I didn't really care how much they would pay me. Those kids were interested to learn English because they see Iki communicating in English. But it turned out that other kids from this apartment building also wanted to join the class too. Now I have totally fourteen students, divided in three classes (^__^)
I was nervous at first, I haven't been teaching for years. But I enjoy it way too much now!!! 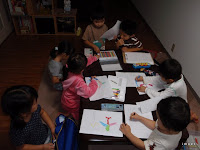 Unexpectedly now I have little income myself. First ever since I married papa-chan five years ago. At least I could buy him birthday present with my own money this year? hehehe
Posted by imoet at 5:07 PM 2 comments: