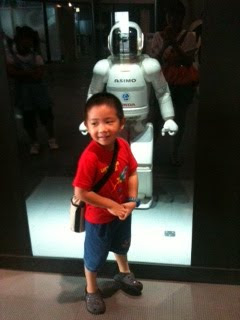 Last Thursday I went to Miraikan (science and innovation museum) in
odaiba with iki and my friend Tomomi and her kids.

Iki was amazed and fell in love with asimo ( the humanoid robot) and
all other scientific stuffs. He was really excited to see a real
moving robot and want to make one himself. He forgot that he wanted to
buy inline skate before and now he all he wants is his his own robot!