Right after breakfast, we went to Pasar Bolu, big traditional market about 20 minutes drive from the hotel. We planned to buy some souvenirs and the famous Toraja coffee before we started our sightseeing. The market was surprisingly BUSY at that second day of Idul Fitri holiday. Lots lots of people that we could hardly walk. It was very hot too, really a huge contribution to people's mood :p. We left quickly after getting what we want, ready for our next adventure.
But there is this damn one car, parked behind our car. Hiro and Ikemura pushed and pushed and pushed but it didn't move. Grrrrhhhh!!!!! I was so pissed off that I kicked that car angrily too :p. We wasted our time waiting for almost half an hour, until then Ikemura had this brilliant idea. He pushed back some cars parked beside us, and then Hiro successfully drove the car out. I don't know how the did it, I wouldn't be able to drive the car out myself through such a small small space! 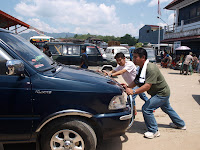 Our next destination is Batutumorang, mentioned as a very high area to see a spectacular panorama. There are some attractions around too, so I thought it worthed. Hiro drove following the map, and mostly his instinct. At last then we asked a boy how to go there and we trusted him. Hiro said that a boy won't lie :p
Well, he didn't lie. We just forgot to ask him if we could go there by car or not!!! The map said that the road we followed was a TREKKING ROUTE, but we were too far already and anyway there were no space we could turn the car around (>.<). Really was a scary offroad trip, dengan jurang dikanan kiri (apa sih jurang bahasa inggrisnya?? :p) Thanks God, we are using company's automatic 4WD's car, otherwise I was pretty sure I would get heart attack ;-p. 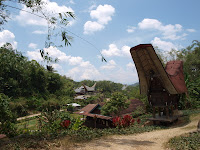 Because of the scary road then we missed the touristic attractions around too :(, and this was the spectacular panorama we found up there at Batutumorang 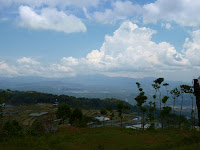 It was beautiful........!!
After having a dissapointing lunch at the only restaurant there, we drove back down (this time using the normal route :p). There were some traditional burial village along the way back, but we just passed them and stop a bit to take picture from distance. We were lucky then when we passed a big field with lots of crowds around. Bull Fighting. Pretty interesting :) 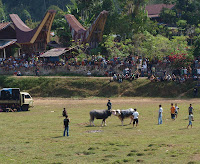 But then two of those huge bulls ran away, passed our car and scared people away. Boy they were huge!!! :))
Then we drove south to Londa, a traditional burial cave. It was almost 4 pm and a bit raining when we arrived there, but we went inside anyway. We hired two guides with lanterns with us this time. I insisted :)) 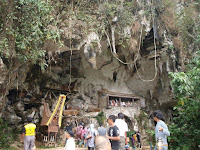 Front view of the cave
This is the view inside the cave. 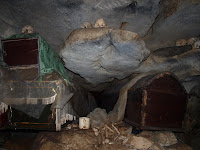 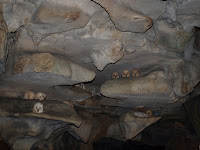 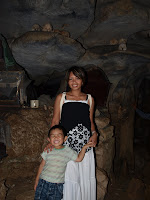 The story about these two skulls is pretty sad. They were cousins who were in love but were not allowed to get married. Both hung themselves on a tree and sadly at the end they were actually together (they were put in the same cave because every cave belongs to one extended family). 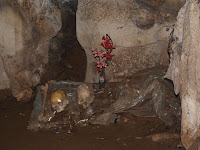 One burial cave in one rocky mountain has different levels to place the coffins based on social strata. Commoners' are located on the lowest part, meanwhile the nobles' are on the higher part of the mountain, which could only be seen from far away.. 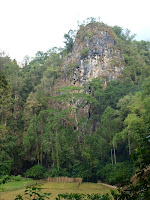 Can you see the holes on the mountain?

I am glad to be able to visit Toraja, one of Indonesia's heritage. With its unique culture, people, and also breathtaking scenery. Come and visit Tana Toraja, you'll experience an unforgettable cultural trip! :) 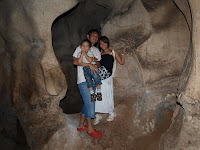 oh yeah it is! and if u go to tana toraja, OF COURSE you can continue a bit to sorowako!!! :D