Food was really good in Tana Toraja, well, at least for me (^___^). I knew that I gained at least 2 kgs during our 3 days trip there :))
The pork was sooo good and fresh. No smell, and really soft. Different to the frozen one we could buy here at Toko Baru: as hard as sandals!!. On our first night Hiro had pork picatta, and I had roasted pork ribs. Boy!!! they were sooo good! I decided that I would eat pork on every possible meal I have in Tana Toraja at that time :p

The next day we went to Bolu Market. It is a big big traditional market compared to what we have in Sorowako, and guess what we found were sold there too?! 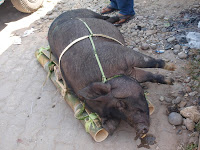 God!!! that's why the pork was fresh! That poor pig looked sleeping but I thought he actually was praying, because once some people put him on a motorbike, he started to cry and cry......as if he knew that he would come to the end. I felt so sick when I saw it....I thought I wouldn't be able to eat any pork that day...... :(

Then we went to Batutumorang, and planned to have Torajan traditional food at the only restaurant there. But what a shock we got to find out that there were no other food available but noodle because of the Idul Fitri holiday!!!! So after a long scary offroad journey, what we got was mie goreng and mihun goreng (>.<) My mood was really ruined there, also because the waitress was so unpolite. But I ate my food anyway. What can I do, I was so hungry :p. Iki loved his mihun goreng, and my mie goreng was surprisingly good. Really good. Until I found a moving light green object beside the green veggies on my plate. WORM. ALIVE!!!!! huuuu huuuu huuuu (T_T) I think I found the worm right after Hiro took this picture! 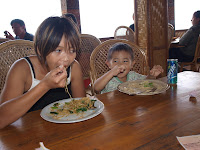 Our dinner that day was unforgettable too. We went to this restaurant named MAMBO, recommended by a friend from Sorowako, and also was written in a Japanese guide book. Being unable to eat Torajan food at lunch, I called the restaurant first to order the food in advance. Torajan has this traditional food named PA'PIONG: meat with special spice and vegetables cooked in a bamboo. I wanted to know if it is the same with what we have in manado (well, almost the same! that's why I was so happy!).
I ordered pork pa'piong and bufallo pa'piong. Torajan eat bufallo so I thought that our trip wouldn't be completed before eating bufallo too. 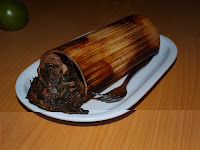 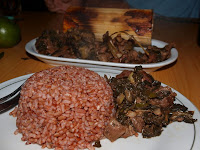 The pa'piong came with the traditional red rice. I thought I wouldn't be able to eat any pork after the pig I saw in the morning so I ate the bufallo meat first. but it was hard, I didn't really like it, so at last I tried the pork one. God, they were soooo good (I'm sorry piggy :p). Besides pa'piong we also ordered some other food: deep fried fish, squid, and chinese pork noodle. All the food at that restaurant were VERY good. Lots of people coming, also foreigners; that I thought this restaurant must be the best in town.

We had a good time there. Drinking, talking, eating, and eating and eating. The best food for me was the pork pa'piong (well, I ordered special spicy chilli sauce too :p). Until the end we kept eating it, until then the nice guys gave me like the last spoon of it. YAY!!!!!

But then I found something black, looked crunchy with legs. COCKROACH!!! 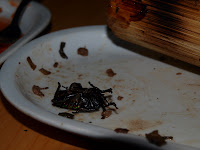 I screamed, and asked the waitress right away: IS THIS PART OF THE TRADITIONAL FOOD?!?!
which of course was not, and they felt so sorry for the incident! Only sorry, for God's sake. We still had to pay!!!!!

But we were already drunk, so we just laughed and laughed about it. Even Hiro who usually is a big complainer just laughed and said: THIS IS INDONESIA, of course we have to pay!.
Well, I felt so gross when I woke up the next day, though :))

Anyway perhaps if by any chance you eat pa'piong, you should check if there's nothing accidentaly crawled inside when it was being cooked :))

This unforgetable food experience made our trip to Tana Toraja is definitely unforgetable (^_-)
Posted by imoet at 9:27 PM

wow imoet, at first i was so jealous with you about the eating and drinking parts, but then forget it. worm i can still tolerate. but cockorach? do u know that it may be the oldest living thing on earth? it survives the dino era, and ooohhhh let me stop here.