I spent the whole morning at the milk run, Sorowako Community Volunteer's program to give milk to underweight children in Sorowako and surroundings (in this case, Wasuponda and Wawondula). Last month we found out about this deaf boy named Abrar. He is 18 months old but weighed only 3.5 kgs!!! He surely is dying of malnutrition, so we wanted to bring him to Sorowako's hospital to get checked. But the father didn't allow the mother to bring the baby to the hospital, for no reason. We couldn't believe it. The boy was really thin and small and dying, and obviously needs help. How could a father just watch his only son dying? because he is deaf? because he has developmental problem? why...?! 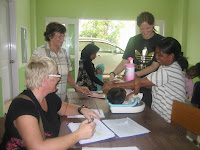 I think then the nurse from Wasuponda local clinic (puskesmas) talked with them intensely until then the father agreed to let us bring the son to the hospital. So this morning he signed the paper, agreed clearly that his son will be brought to the hospital in Sorowako for treatment. He looked happy too when we told him that we will pay all the hospital bill. We stated clearly that we're just trying to help Abrar, eventhough everything is again back in God's hand. 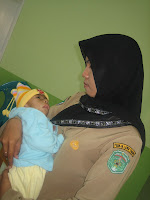 So then we brought Abrar and his mom to the hospital. Poor Abrar....he only has bone and skin!!! I could barely feel any other thing in between. They put tube from his nose to his stomach to feed him, and he cried. It was like a little squeak only. It was really heartbreaking to see him suffering. I was actually trembling, and my mind was on my 3.5 years old FAT boy......
I felt better to see color on his lips an hour after they gave him liquid. I hope he would be fine....I do really really hope. 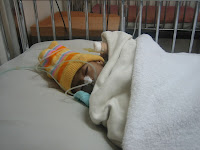 I couldn't let him out of my mind the whole day, and talked about him with Iki too. Too bad when I wanted to talk with Hiro on how I felt about him today he felt disturbed. He was too busy playing pinball on his computer :(
I am so emotional now. I know. I need a break. I think I will go to Surabaya tomorrow night. I planned to go last Wednesday (I wanted to go this week because Iki will start school again next week) actually but Hiro said that I was invited to his ex boss' farewell party tomorrow night. I wanted to respect that old man so I cancelled my plan. But tonight Hiro told me that he doesn't want me to go tomorrow, so....Surabaya, here I come!!!! ;-)
I will eat as much as possible there :))
Posted by imoet at 10:57 PM

how is lil abrar now? 3.5 kg is smaller than keito when he was born.

yun: ayuuuk :))
vini: today he is 4.6 kg. just a month after we brought him to the hospitsl. yeah...he was just skin and bones!