Another Halloween theme Obento. It was the obento for the sweet potatoes picking last month. 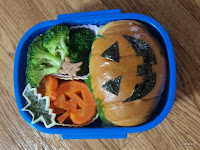 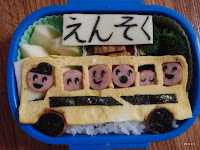 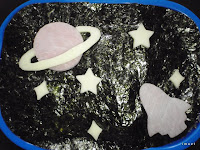 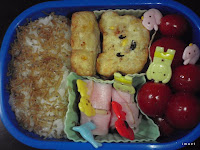 Inside:
Rice with dried small fish on top
Bear shaped croquettes
Roasted mini tomatoes
Ham and cheese rolls
Robot Obento.
I woke up late and only had 15 minutes to prepare bento that day (>.<). It was supposed to be robot, but Iki said it was just a purple doll (@_@) 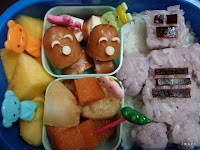 Inside:
Rice with purple colored furikake and kombu
Niku jaga
Cut kaki (persimmon)
Sausage and cheese on picks
Pon-chan (???) Obento.
Not sure if it is the correct name. One of Pokemon character, Iki just showed me the picture and asked me to make it last week. 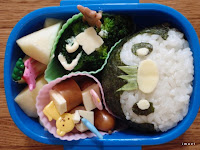 Inside:
Boiled broccoli
Rice onigiri with salted kombu filling
Sausage and processed cheese on picks
Cut apples
And this is today's obento. "Yochien's Bestfriend" obento.
Iki said that they were Iki and Isamu. Isamu is his classmate and Iki said that he likes him because they always play tatakai gokko (fighting game) :p. And they were wearing Yochien (kindergarten) hats as they always do! I think it was sweet :) 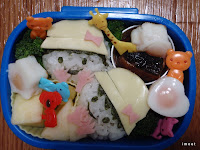 Inside:
Boiled broccoli
Rice balls with kombu fillings. Nori, sliced cheese and ham
Buri no teriyaki
quail sunny side up eggs
Cut appples
Next Wednesday's bento will be the last this year. Winter holiday is coming soon, Christmas is just around the corner.
So next week's obento....hopefully will be a christmas theme one! (^___^)
Posted by imoet at 10:34 AM

WOW! Kamu makin canggih bikin Obentos ya Mut... And here I am dreading the time when I will be packing sandwiches every morning for 300 days per year for the next 15 years!

hey, it would be fine. after 10 days, you'll get used to prepare sandwich, and might think to challenge yourself for a cute bento? :D i dont mind to send you over some cute bento picks!! SERIOUSLY ;-)