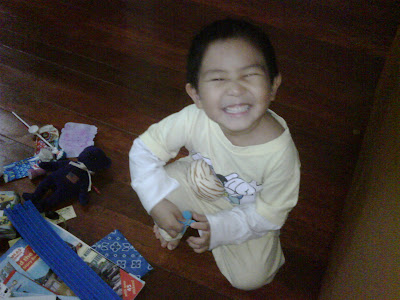 Every year Iki's school has Christmas Concert just before the long holiday. This year Iki's class (the preschooler) will open and close the concert by singing.

The first song would be 'Mary's Boy Child" and the other one is 'We wish u a Merry Christmas' also with the Indonesian version.

Iki learnt both songs in a day and he sings while playing. So cute, that I was pretty sure things will work out well during the concert. But I am fully awared that Iki is very shy and an introvert boy so I am pretty worried too actually.

And last Friday Iki's school teacher called me. She said that Iki always doesn't want to stand up and sing together during practice so he'd better only sing one song during the concert. She thinks that singing on the stage makes shy iki stress....and also if suddenly Iki doesn't want to sing at that day, he will disturb the performance!

I was so sad and dissapointed to hear that. This is the first time in Iki's life so I am sure its a huge thing for him, for shy Iki to sing in front of many people in a concert. But shouldn't he get the chance????
And if he really doesn't want to sing, what is so difficult to move the kids formation a bit?
And why the heck she told me about this just few days before the concert?? Shouldn't it better be told before so I could talk to Iki?

I talked to Iki. He said that he didn't sing because he didn't want to get the sticker. Apparently the teacher gives sticker to every kid who could sing during practice, and shy Iki just simply is. not interested on sticker! But when I told Iki that Santa Clause won't come if he doesn't sing, then he promised me to sing! See?!

Powered by Telkomsel BlackBerry®
Posted by imoet at 10:08 PM