It's not easy to make Iki voluntarily studying English at home anymore. It used to be really easy when we just moved in here, he loved to study English back then. But now he is busy. After school he is always busy playing with his friends or swimming or gymnastic class.
His Japanese is really good now. He knows a lot of new vocabularies, and can already help translating them to me whenever I feel lost. Of course that he spends most of his time talking in Japanese. He even starts to talk to me in Japanese too......
Me: Iki I don't know what you're talking about. In English pls!'
Iki: Oh come on mom, I know you speak Japanese. I always heard you talking in Japanese here
Me: Yes, but my Japanese is not good right? I don't really understand what you're talking about
Iki: So you have to practice more!! Just talk to me in Japanese, it's good training
(>.<)
Now he can write and read in Hiragana and started to read Katakana too. It's just like me! I can read and write hiragana and katakana only :p 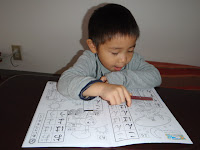 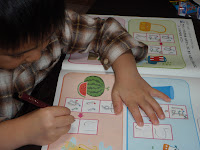 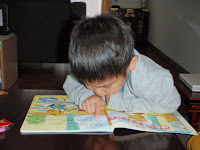 With all his daily activities, his pay less attention to his English now. He knows alphabets and can write them all but is not really interested learning phonics so no progress at all for these three months. Iki likes computers so I use computer, internet and even iphone as learning media too but I want him to practice his English more. I planned to put him into Summer course at the closest International kindergarten, but the school said that Iki's age group for summer course are all usually Japanese children who won't talk in English yet..... 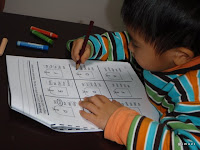 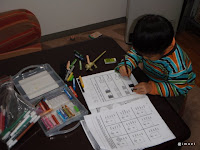 Meanwhile he just laughed at me whenever I talk to him in Indonesian. For him talking in Indonesian is only to his grandparents from Indonesia. And surprisingly during his once a week phone call he can still talk fluently to them. He could even still sing Indonesian song to them (this afternoon was cicak cicak dingdingding :p), he would never sing it to me whenever I ask him to
I don't know if I have too much expectations on him.
I want him to be able to speak Japanese because he is a Japanese
I want him to speak English too. It's the main language in our house
And I want him to speak Indonesian too to be able to communicate with my family in Indonesia
Posted by imoet at 4:30 PM

That's cute, that he's starting to translate Japanese to you. It comes handy to have kid fluently speaks second or even third language :D

gpp juga Mut, bener kata Yunita kok... for now maybe he's not interested in phonics and all the written stuff tapi DON'T give up and don't switch to Japanese when talking to him. You have to stay consistent. Banyak anak2 yg terlahir bi- bahkan trilingual dan mereka turned out to be alright... mungkin nggak semua jadi guru bahasa tapi yg jelas mereka turned to understand all the languages very well and have a very good command on their native languages.

No worries... I'm sure he'll manage well, that smart boy. He's just in his "rebellion" phase (I used to do that as well coz my mom tried to read me books and talk to me in English when I was a child.)

Big hug and hang in there. He'll do really jusssssssst fine!