Yesterday Iki and I went to Kidzania with Miwa and her kids. Akari and Yusuke were very close to Iki when we lived in Sorowako, so he was really excited to meet them again.
This is quoted from Japan National Tourism Organization about Kidzania:
KidZania - "A land of kids, by kids, for kids" - where children can experience their favorite job and learn about the social system while having fun. Authentic looking "pavilions" including a bank, hospital, newspaper company, radio station, and pizza shop are all about 2/3 the size of a real building, and there are about 70 professional activities to try including banker, doctor, fashion model, newspaper journalist, and firefighter. The target age is 2 to 12 years old. Although adults are not allowed to enter the pavilions, there are monitors and observation windows so that parents can watch their children working actively. Children are paid for their work in "Kidzo" money, which can be used in KidZania to shop at a department store, save at a bank or withdraw from an ATM within KidZania. This is a wonderful way to help children realize the pleasure of working.
I heard about the place a while ago but just got the chance to go there yesterday. I was really amazed and Iki and the kids had so much fun "working" and earning money.
First they worked at a construction company, OBAYASHI; building the new Tokyo Tower. He got 8 Kidzos (the currency used in the city) for that job 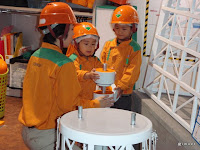 This is the tower they built 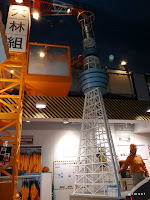 And last photo with the construction team 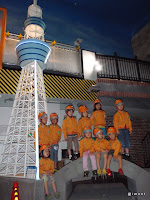 And then they worked part time at Moss Burger, Japanese famous burger restaurant. He got 5 kidzos and a burger, for his lunch 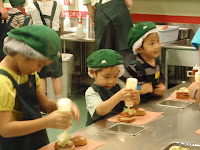 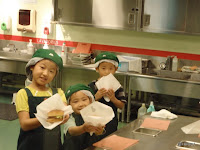 Then he went to the bank to open a bank account and to get an ATM, and yeah, he had to queue in front of the counter too :p 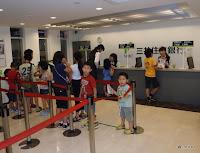 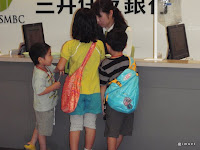 And went to JCB to apply for an electronic money card 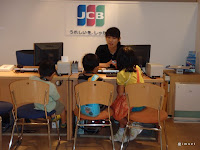 Time to work again! they worked as a car mechanic, got paid for 8 kidzos to change tire and batteries. 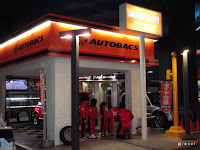 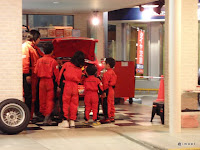 It made them hungry, so they worked at an ice cream shop and then bought themselves ice cream for 10 kidzos each - what an expensive ice cream!! :p 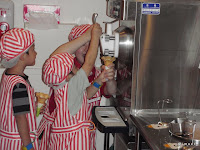 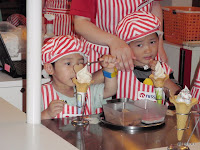 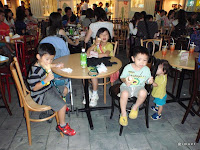 Then they went to EPSON art school to learn how to make sticker. They have to pay 10 kidzos each for that. 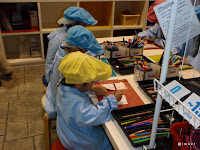 For doing those jobs they have to queue for quite a long time. Some popular jobs like pilot, firemen, for example need about 1-2 hours for waiting. We were quite lucky this time, the kids didnt have to wait for too long. The longest waiting time was to work at the ice cream shop, 1 hour!
Kidzania was an interesting mini city. There are 70 occupations the kids can do there, but due to waiting time usually they could only do 3-4 jobs in a day. There are two sessions to choose to enter kidzania. 9am-3pm sessions, or 4pm-9 pm session. Seems long, but was actually passed really quick for the kids - not for the parents because they can only wait and watch the kids having fun :p
There is beauty salon there. Look, some customers got manicured ;-) 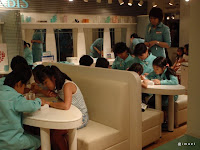 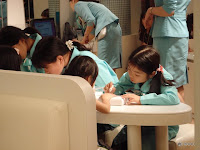 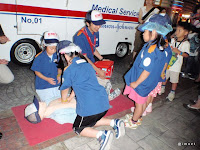 And a journalist walking around with their camera 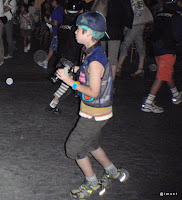 At the corner some were trying to fix the electric cable 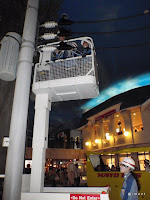 Then suddenly there was a loud sirene and a firecar passed. 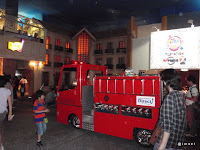 Oh, there's a house on fire. Some firemen worked hard to turn off the fire. 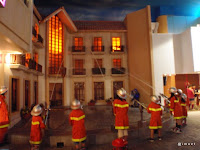 The kids could rent cars, but they have to pass the driving license test first. Some kids can work at the car rental company too. Once they rent cars, they could drive around, and look! there's a gasoline stand too when they need it :p 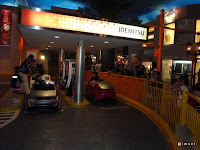 At SONY counter kids can learn how to be a photographer too, but I guess they have to work hard to be able to pay the fee :p 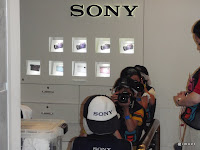 And many other jobs. It was such a good place for kids, even better than disneyland!!
Kids have to pay for 4400 yen (44 USD) and adults 1900 yen (19 USD) to enter kidzania, and reservation must be made online through the website. Weekends are usually fully booked though, better made reservation ahead of time. We made our reservation a month before!
And to my surprise there is kidzania in Jakarta too!!!! If I ever HAVE to go to jakarta, I think I would definitely bring Iki there. hopefully its cheaper than the one in Tokyo hahaha
Iki learnt a good lessons yesterday. That he will have to work hard to be able to buy what he wants. Later at home he wanted me to pay him to clean up his toys haha. So now he can earn 10 yen after each job he finished at home. He said that he will save his money in the bank too later and buy toys. Well, he only has 30 yen now and the toys he wants is 3000 yen :p. Good Luck, Iki!!!! (^___^) 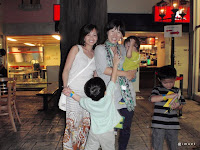