We went to Zao, an onsen area in northern Japan last weekend. Ski season just started last week, so Hiro thought it would be a great way to spend Christmas skiing instead of camping!
At first Iki was excited and followed papa-chan instruction 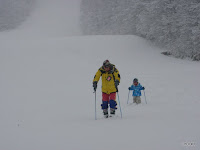 Well then again, the drama began. Papa-chan got angry and Iki-chan started to cry 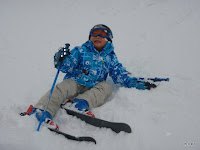 Papa-chan walked away.... and everyone felt bad. 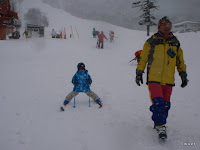 So at last we just put him into the ski school. He loved it, wanted to learn ski more, but not from papa-chan. He wants to learn only from the ski school now (>.<). 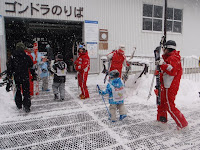 Anyway both papa-chan and Iki-chan had a good time skiing. And me....just waiting while watching the snowfall and eating a lot of high calorie snacks (@_@).
At least I had fun playing with Iki 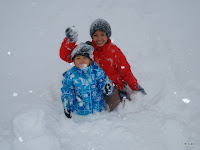 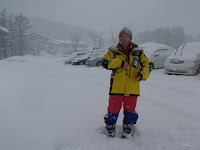 It was a beautiful day afterall. A beautiful white Christmas (^_^) 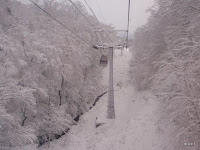 Merry Christmas, hope yours' are as beautiful as ours
Posted by imoet at 11:33 PM

Hehe don't you love Christmas drama? Here I have all my siblings for Christmas. :) Merry Christmas, Shierly!

0h ya well. christmas is not complete without drama :p

i guess there's more interesting drama there with all of those siblings?! hehe
but i miss christmas with my family back in indonesia la. disini natal cuma hiasan kerlap kerlip, presents n santa claus!

I felt cold just looking at the pictures!!

vivi: haha well, it WAS cold!