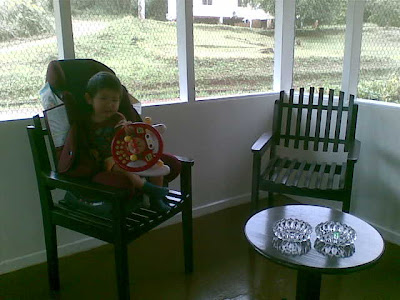 Iki was grumpy from the second he opened his eyes this morning. I didn't know what he wanted. This whole week he has been acting as a baby. He wants my fully attention and always cries over tiny stuffs. Grhh he drives me nuts!
After crying the whole morning, he wanted to sit on his baby's car seat that just arrived from Japan yesterday. At first I said no, but then I just couldn't stand his shrieking so I put him on that seat. And put the seat belt on too....!
It was when my gardener came and knocked the door. I went out to explain what he must do today. I totally forgot that our door's lock is broken. It would automatically be locked and can't be opened without a key from outside. And this morning I didn't bring a key out...when I finished talking to the gardener, I was so freaked out to find out that the door was locked. I couldn't get inside, I had no phone in my pocket, and my crying son was dangerously locked on his car seat!!! Look at him on that picture. If he moved forward he could fall onto the table before hitting the ground!
My gardener couldn't help me so I ran to the nearest bus stop to ask someone to call the service department. I told the on call service that it was an emergency so that he could come asap. I waited for damn 30 minutes but nobody came. Then my maid came and an ojek driver tried to find a security to help me out. Meanwhile my boy was crying his eyes out inside. I stayed nearby the window to talk to him, and my maid tried to break the door's lock. She climbed the back window, opened it, climbed it, and opened the back door's lock from there. Oh, the hero!!!!
The 'emergency' service department came 10 minutes later, which made the total waiting time was 40 minutes!! Looked annoyed because the door was opened already. Anything can happen in 40 minutes right?! Shouldn't I be the one who was upset!?
Anyway it was over and thank God that Iki was alright.
But now I am wondering...if Mina-chan could get inside the house from outside, ANYONE could do that too!!! Oh my....
Posted by imoet at 3:39 PM

Ah. The ever-questioning "someone could get inside my house SO easily!".

That's why I always ensure my daughter's room is always locked from inside at night. My dogs strangely always choose to sleep outside HER room.

That's why I got a replica of a samurai sword (sharp enough to seriously hurt someone and I won't hesitate to use it)and (a huge) flashlight in my bedroom.

Oh, I also got a very sharp hunting knife hidden somewhere in the living room. just in case.

And I got locks for windows and doors.

Aku kok ikutan gemes, kamu Moet bolak-balik kekunci pintu. And yes, if anyone was watching they will know how to get in, maling banyak Moet di Indo...

Hhuh! 40 minutes to get to emergency isn't very good at all, there's no point is it? Mending kasih Mina-chan kunci cadangan dan telepon genggam, she'll be likely to be available for you much quicker whenever you're in emergency....