My mother in laws said a lot of times that she wanted to see Iki swimming so last Saturday I asked them to go to Toshimaen, an amusement park that also has swimming pools. It was hot, but well, this is Summer, and this is the only season such public swimming pool is opened here. I thought they would enjoy, but she suffered from the heat, complained a lot (_ _;), and didn't even go nearby the pool at all....! 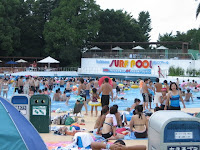 But anyway Iki enjoyed it. He loves swimming, so he showed his grandfather off a bit of his ability (^_^). He enjoyed the human-made waves there too. He screamed excitedly everytime the wave coming towards him. For him it was the first wave he ever experienced, because previously he didn't want to step onto the beach's sand :p. 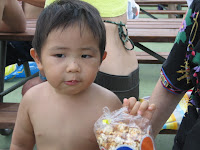 Everyone ordered Ramen for lunch, which according to my parents in laws didn't taste good. But for a ramen lover like me, it didn't taste bad. I ate two portions to show them that I really enjoyed the ramen hahaha. 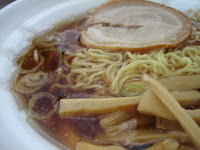 The entrance fee was expensive, but I couldn't stand the complaints so we went back early. Which was a good decision because then it was raining. We went to Tobu department store then. My parents in laws don't like my fashion style so they did a bit make over. They said that my clothes are too casual, and my mother in law doesn't like me wearing tank tops that shows my bras hahahaha. hey...!! This is summer, for God's sake! I love tank tops and Hiro said it's OK!!! (>.<). I let them buying me some clothes, anyway. They had to pay like 500 USD for 4 blouses. Well, that's the price of trying to "change" me :p

Only 6 more weekends only left. I'll try to make them happy playing with Iki for the coming 6 weekends (^_^)
Posted by imoet at 10:31 PM

hehehe, i've never met anyone who hasn't got any trouble with in-laws.
ah ya, you don't have to be in love with them, just have some respect and hopefully things will turn out rite. :D