We just got back from Sendai today. It took about 1.5 hours trip by Shinkansen. Iki was excited to ride a shinkansen again that he became very very active! 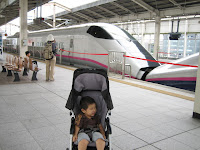 Lately Iki usually gets his own seat inside an airplane. He also sits on his baby seat in the car. That's why this time he also wanted to sit on his own seat inside the Shinkansen, which was impossible because I only bought one ticket (>.<). He was upset and made a lot of noises.... Until then the woman sitting in front of us got mad. She stood up and rudely said: "Urusai!!" (= noisy!!). I said really really sorry but she continued: "Kodomo to Shinkansen de noranaide kudasai!" (= please don't ride Shinkansen with a kid). Which for me was really rude. COME ON!!! There's no rule that a kid is not allowed to ride a Shinkansen!!! GRRRHHHH
Anyway I said sorry again, because I realised that Iki's behavior disturbed other people. But because I was hurt with that woman statement I said sorry again and added sarcastically: "Sumimasen....Nihon-jin wa yasashii to omotta!" (=sorry, I thought Japanese are friendly!)

Which made an old lady sitting behind told me not to worry. That she might have no child that she didn't know how it feels travelling with a kid. I said thank you to her and walked away. I was really sad and hurt.

A foreigner sitting on the front side of that compartment then talked to me. He said that it's a public secret that many Japanese are not friendly towards kids. Which actually I know :p. They rarely helped me out when I got difficulty pulling out the-stucked-stroller-between-the-railway, for example; or giving me "annoyed" eyes if I get inside a train with a stroller. Noone ever gave me a seat on the train eventhough I hugged a heavy-active-kid, they would just pretend to sleep deeply (but amazingly woke up at their arrival stations). But I just didn't expect someone bursted out such a rude statement to me. It's like a slap on my face (@_@).

What a bad ending of my fun getaway to Sendai!!!!!

I had lunch with my mother in law at Ikebukuro and this is what she said when she heard the story: "That's why you shouldn't travel by yourself. If you went to Sendai with ME, someone wouldn't dare to say such thing!" hahahaha. Yeah right!!!

Wow, I'd like to see how your mom in law will deal with that bitch!